A lot of visitors say Great Barrier Island is like stepping back in time.

All homes and accommodation places are reliant on their own power, waste and water systems.

Recent participants in the Off the Grid Festival had the chance to see some of the ways these basic needs are being met during a bus (and barge) tour to Jude’s Scallop House, Fraser’s Stone House, Julie’s Whare and a Herbst Architects’ beach shelter, each reflecting the needs, means and unique personalities of their owners.

A workshop about life on Barrier 50 years ago with several long-term residents, conveyed the strong sense of community and resourcefulness and that has come to define the island. 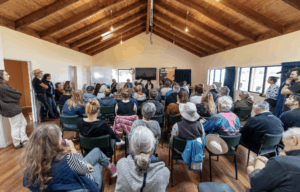 Aotea is keen to draw the best of the past – the ingenuity of pioneering families and the matauranga of ancestors – while embracing a future distinctively different than the rest of the planet.

Opening the festival’s panel discussion, Alec Tang, former Chief Sustainability Officer at Auckland Council, said “our systems are completely inadequate now and for what we’ll need in the future.”

Festival guest Angela Clifford, CEO at Eat New Zealand, told the audience “we’re locked into a colonial system that was designed to send butter and milk to the motherland. The motherland has changed but the system hasn’t – we send our best foods overseas and import cheap rubbish.”

According to Auckland Central Green MP Chlöe Swarbrick, we’re stuck in a system that pursues growth for the sake of growth, measures progress inadequately through GDP and enriches only a minority of the population.

Most of this System – manifest in legislation, regulation, international treaties, taxes, subsidies and contracts and procurement – actually conspires against businesses that aim to regenerate the land, redistribute wealth and foster mauri and wairua, she says. 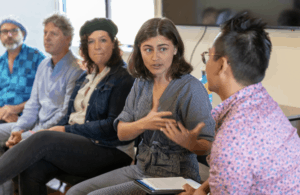 Her answer is Culture – a shared set of values, awareness, education (protests and petitions where necessary), telling of stories and proof of concept – which the island has in spades.

And how might this play out in 50 years’ time?

We will need to re-invent our food system, says Angela Clifford, to make it “local heavy and global lite.” She sees an island of trees, including groves for fruit and nuts (cleverly protected from kākā and thriving populations of other native birds), shared gardens, a community dairy herd, island-based fishers and seaweed farms.

Visitors can already get a taste of this in island-produced micro-greens, gin, beer, honey and matauranga-inspired health products.

Festival guest Logan Wait told festival goers how his Waikato-based mobile abattoir – it took him three years to work out how to meet MPI’s export-oriented food safety standards – can kill and butcher stock in the environment they grew up in rather than a gruelling trip to a freezing works.  He believes stress-free, local meat has the potential to increase margins for farmers so they are able to embrace restorative agriculture.

Part time resident Scott Macindoe demonstrated how to cook fish respectfully, ‘nose to tail.’ The Te Kai Ika Project he helped establish allows the exchange of unwanted fish heads and frames between recreational and commercial fishers and those in need, including marae, families and communities in South Auckland. The Legasea initiative he champions wants to put fisheries back in service of communities and Māori, rather than a few export-oriented companies that over time have replaced island-based fishers and monopolised the supply of fresh fish under the fisheries management system. 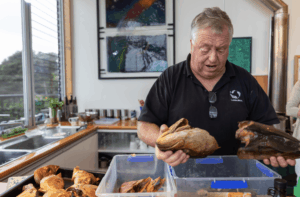 Auckland-based recycling and social enterprise champion Jon Morgan, aka Green Jon, sees the future of the island as clusters of microbusinesses working together to ensure zero waste.

Anamata is showing the way, operating a resource recovery centre and shop which sells reusable and up-cycled household and building materials to avoid it going to landfill. (You can hunt for treasures from 9am-4pm Monday, Wednesday, Friday and 10am-3pm Saturday).

Festival guest Alan Brent, Professor of Sustainable Energy at Victoria University, believes Aotea is a perfect place to explore the value of microgrids.

Claris Centre owner Sean McCarthy is prototyping the approach. Working with alternative energy company Sunergisehe manages an array of 250 solar panels and Tesla battery power pack that supplies metred power to six businesses in the centre and one nearby household. Instead of running a generator 500 hours a month, burning 20,000 litres of diesel, a generator now kicks in just 10 to 20 hours a month on cloudy days.

Festival goers Zoomed in to a discussion with Søren Hermansen, Director of the Energy Academy on the island of Samsø in Denmark, home to 4000 residents. The community won a government contest designed to reduce carbon footprints and encourage transitions to renewable energy. This has included buying the ferry service and converting it to biofuel.

Motubikes is an early mover in the field, running a fleet of New Zealand-designed, electric farmbikes to enable visitors to get around the island in a fun, eco-friendly way. 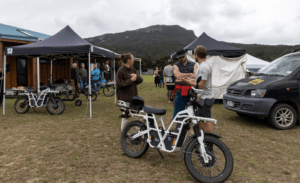 Aotea Brewing owner Caleb Clarke’s focus is on treating water as a precious resource. The brewery aims to halve the amount of water usually required to make beer through clever washing systems and re-use.  Beer is only sold in multi-use bottles and flasks. He’s also keen to regenerate the wetland system the containerised brewery sits on the edge of, from rank kikuyu grass to thriving natives. (You can view progress and taste brews from 12 – 5pm Saturday and Sunday through winter).

Sarah Bowman of the AoteaOra Trust, organiser of the festival, says ‘Off the Grid’ tends to be associated with individualism and independence, but it’s collective effort she sees at the heart of Aotea’s future.

“Not everyone needs to own a chainsaw or create a garden. But they might have trees or time to plant and mulch. People might have knowledge about heritage trees or small surpluses they will want to pass on. It’s about finding the time and spaces that enable these exchanges.”

Aotea can be a place where people come for real sustenance – food and ideas – the panel discussion concluded. We should be ‘inoculating visitors’ with the inspiration and templates that the rest of the world desperately needs.

“We don’t fit in boxes,” Local Board Chair Izzy Fordham said, “but our time is coming.”