“My goodness, what a beautiful group of women,” says Anne Kernohan of the island’s Aotea Yoga Collective.

When former island yoga teacher Julie Stansfield offered to sell her practice just over a year ago, six yoginis (female master yoga practitioners) got together.

“There was a bit of negotiation about equipment and goodwill, so we had a few meetings, and all got to know each other,” says Anne.

Anne is the island vet, a mother of four Barrier-raised adult children and grandmother to three.

Her yoga journey began as a self-taught teen and her first lessons were with Linda Power, who has taught Iyengar yoga on the island for 30 years.

Anne attended a Kundalini course in Byron Bay with Julie which had a profound effect, then another intensive retreat in New Mexico before formal teacher training with Erin O’Hara in Takapuna.

“Kundalini is an ancient technology which by putting stress on the body, changes the neural pathways in the brain,” Anne says. It was one of the last forms of yoga to make its way to the West, finding devotees in California in the Sixties.

A typical session is one and a half hours with chants, mantra, asanas (yoga postures) and meditation.

Sofia Kuczera has been taking a regular Monday 10am community class since coming to the island six years ago from the Bay of Islands. She grew up in a sailing family and has crewed on several Greenpeace ships. “Yoga helped me connect back with earth after a life at sea,” she says. She teaches a gentle flowing Hatha style and gives lots of variations to make classes “accessible for everyBODY.”

No sooner had the group formed, COVID threw its planned schedule of classes into disarray, with sessions moving outside, distanced and online.

Sofia has enjoyed taking classes outdoors and connecting with Nature, on beaches, the deck of the Claris Conference Centre, or beautiful private gardens like Jacques’ Bee Sanctuary near Claris.

Eunate Puy-Azurmendi was born in the Basque Country and moved to Aotea in 2017 “after a wonderful bicycle-based life around Europe and Asia.” Eunate, she tells me, is pronounced with Te Reo Māori vowels.

Her Hatha-based classes link breath to movement and the postures are slow and static to build strength and stability of body and mind.

She has a weekly class on Wednesdays in the Elephant Gallery’s garden and offers private lessons tailored to different needs and time availability.

Sacha Eddington discovered yoga in 1998 while in London working in a stressful IT environment. “The practice helped me to centre and learn to breathe … it was like returning home to myself.”

She completed Sivananda teacher training in India in 2005 and went on to manage the Special Yoga Centre and teach specialized yoga classes for autistic children in Greenwich.

On returning to Aotearoa in 2012 Sacha furthered her training with Donna Farhi, exploring the subtler parts of yoga and healing the mind/body. She has explored many different pathways of healing and believes the body heals itself, “especially when you take the time to apply what you know is true for you. That is yoga, a way of reenergizing and revitalizing the body so it can be in harmony.”

She currently homeschools her five children and is teaching Hatha yoga in the North, at Motairehe Marae as part of the Hauora well-being programme, as well as online classes from her home on Rangiāhua, one of the Broken Islands south of Port Fitzroy.

Lucia Victoria hails from Argentina and moved to New Zealand in 2009 and then Aotea in 2019.

After practicing yoga for many years, “one day I decided to go to the source, to learn from the best, from the people that were born with it in their DNA so I went to India and learnt, among other things, asanas and their adjustment and alignment, yoga philosophy, ayurveda and the power of mantras and meditation.”

Lucia teaches Hatha yoga “with a mix of personal additions that have helped me through life.”

Sharlamon Marx grew up on Aotea as a teenager in the late 80s and early 90s and returned home about three years ago. 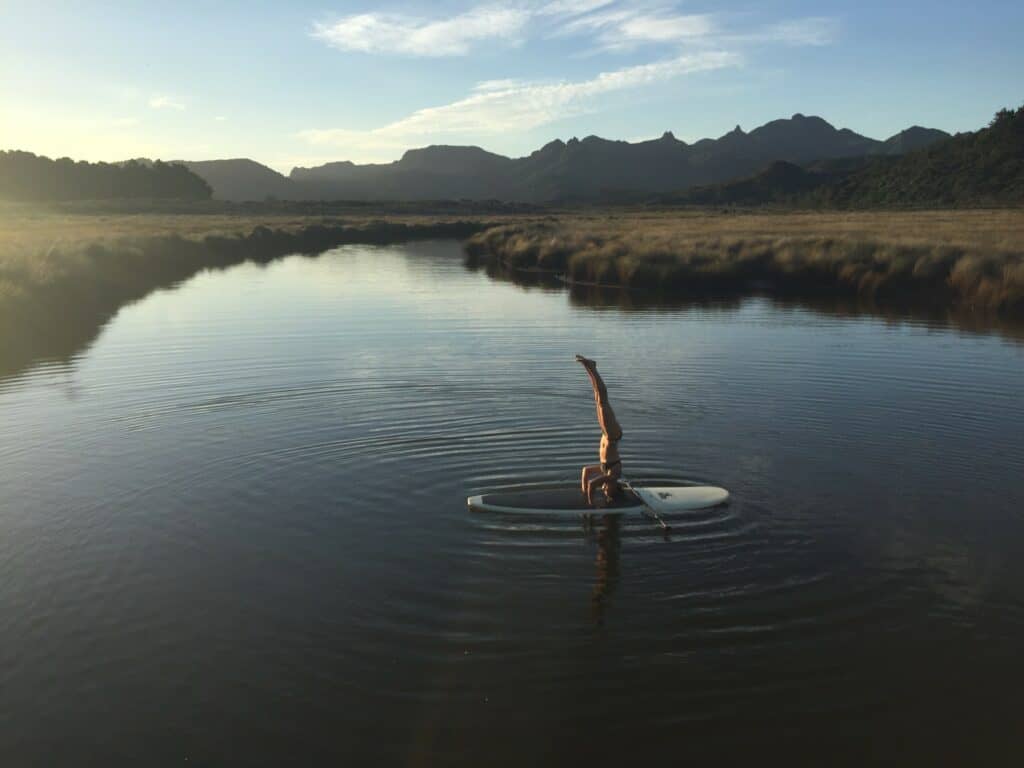 Sharlamon Marx out on her paddle board on Kaitoke stream.

“The island provides me with a deep sense of belonging and contentment and I teach a Vinyasa flow style yoga that is both invigorating and grounding.”

Anne says the collective aims to build a strong yoga community on the island.

This island cultivates spirituality, she says. “For some it is expressed in surfing, gardening or being in the bush.”

“We don’t know the flow on effects of yoga practice, but I imagine it will create more kindness, tolerance, respect for life, the opinions of others and the sacredness of the earth.”

Visitors are welcome and you can check out the availability of classes on the Aotea Yoga Collective Facebook page. Charges are $15 for 75 min classes or $17 for 90 min work outs.